A Magna Carta for Europe! 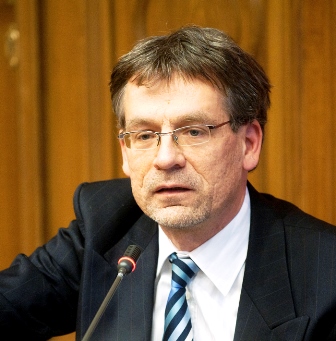 Arguably, Magna Carta is the oldest document of the development of what came to be called the rule of law in Britain and in the Western World in general. It was born 800 years ago, on 15 June, 1215., at Runnymede, near Windsor.

Sitting in my room at the Runnymede-on-Thames Hotel I watch the well-dressed ladies and gentlemen heading towards the celebration of this honourable event. I myself can only be here due to the generosity of an American non-profit foundation which organised a somewhat untypical academic conference on the topic at this venue. The occasion lets one think about the contemporary relevance of this document. How could the present generation keep its momentum in the new context of the 21 century?

Let me express what I have in mind in a direct form. I think that such a document can only survive the changes of time if it can have a new function. My idea is this: we need a new Magna Carta of Europe, signed and issued by the present leaders of the European Union, as a pledge to the political communities of Europe

One can say that (a) this a suggestion that sounds too romantic, or even utopian, and that (b) realistically there is no chance for the birth of such a document. One can also add to this opinion the view that (c) even if it was accepted it would have no beneficial direct effect on the views and deeds of major European protagonists and the ideological warfare of the opinion mongers.

However, I am convinced that such a gesture would mean a lot in the present European political climate, when the European electorate is to a large extent dissatisfied with the course of events on the Continent. Therefore, if assumptions like (a) and (b) might turn out to be true, (c) will definitely not stand. Even a highly general, vague and unprecise document as the one built from the promises suggested above could have a beneficial effect in a climate of genuine distrust and suspicion when the European organs do not have the necessary popular legitimacy, when large portions of the electorate feel that the decision makers who make decisions for them and their descendants are too far away to be controlled by the voters.

A Magna Carta for Europe could give an occasion for the European leaders to reaffirm before the citizens and their local communities that ideas like limited government, self-restraint and a kind of subsidiarity are still far away in the European institutional framework. It would also provide legal means for the local communities to challenge before the court undue efforts to centralise power in the European power-houses. It is high time that such a promise of the European leadership be addressed to diverse groups of the deeply divided European population. Most of Europe would be grateful for a Magna Carta for Europe.

Papers cannot limit or restrain tyrants. Look at the Constitution of the United States, a document forged by the most brilliant minds of that time exactly to limit the size and power of the federal government. And look at the results. As the forgotten philosopher, Lysander Spooner wisely noted:

"But whether the Constitution really be one thing, or another, this much is certain - that it has either authorized such a government as we have had, or has been powerless to prevent it. In either case, it is unfit to exist. "

These are but papers that have no power over corruption and the lust for might. Throughout the times, they were written and circumvented. To quote Murray Rothbard:

"The last few centuries were times when men tried to place constitutional and other limits on the State, only to find that such limits, as with all other attempts, have failed. Of all the numerous forms that governments have taken over the centuries, of all the concepts and institutions that have been tried, none has succeeded in keeping the State in check. The problem of the State is evidently as far from solution as ever. Perhaps new paths of inquiry must be explored, if the successful, final solution of the State question is ever to be attained."
Válasz erre
Mégsem
Mégsem